Here’s the thing about the ocean; it has this amazing capacity to transform. Take a normal summer’s day in Southern California. At dawn, there is usually just a faint offshore breeze, and the sea is just as smooth and tranquil as you could possibly imagine. An hour or two later, the offshore dies and the magic of a perfectly glassy sea just slays you. If you are just a few miles offshore, the water is deep blue and clear, and you can see deep into its depths. On Siwash we used to love sitting on the bowsprit 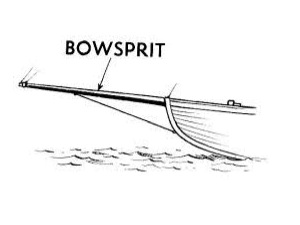 looking down into the blue deeps during such glassy times while motoring to Catalina.

Then the westerly wind comes up and you start to see small ripples. Formed by the interaction of the wind with the unique physical chemistry of water (a sea of methane would never have ripples because there is no surface tension).

Over the next half hour, as the westerly freshens, the ripples turn to wavelets, then small waves that “lap” the bow. If it gets up to the usual 15-20 knots, these waves become 2 feet or so, and the bow starts to go up and down. We used to delight when this motion would put the dolphin striker into the water.

White caps (small breaking waves caused by the wind) would hit the bow splashing up onto the foredeck. Very exhilarating.

Sometimes, if the westerly was pretty strong, the waves would build so that sitting on the bowsprit with your feet dangling, you might get those feet wet.

By late afternoon, if your dad would let you stay standing on the bowsprit, you might even get your feet wet as the hobby-horsing action of the old Siwash would resonate with the 3 foot waves.

Rewind to 1983. My big brother Howard had bought a Moore 24, named it Presto (he’s a musician, look it up!), sort of the honey badger of sailboats. It can blow as hard as you like; that Moore 24 just doesn’t give a shit. It just goes faster and faster. We were set to sail Presto in the MORA San Francisco to San Diego race in July, the same month we set sail on Psyche to Hawaii. We start this Monday!

Back in 1983, we started in San Francisco Bay, and sailed out through the gate in a freshening 15-knot breeze. We turned south, set the spinnaker and began to fly in front of the northwest winds. Presto is incredibly light, 2000 lbs. It scoots down wind. It planes like a surfboard in any wind over 15 knots. Riding 3-4 foot waves, and just flying along. We were having a blast. The wind increased to 20 knots as night fell. I was off watch and slept fitfully as my brother and one of the best blue-water sailors I’ve ever known, Willie Bell, enjoyed the freshening breeze in the overcast darkness that is the trademark of that coastline. When I awoke, Willie was sailing the boat in “active mode”. I had seen Willie steer a much bigger boat, a Lapworth 50, Sumatra, in 35 knots of tail wind in the Mazatlan race a few years earlier. His quick motions on the wheel were so precise and smooth that Sumatra just sliced through those phosphorescent seas. No one else dared steer that charging bull till the wind abated a little. Tonight it was just dark. The wind was pushing 30, and Willie was again in active mode, concentrating ever so hard to keep the 24-foot Presto in the groove. In these conditions, as long as you are going fast, all is fine. You have good control, and can steer the boat around chunks of chop. But as soon as you are off the wave, the boat is down to 7 or 8 knots, it wallows. The wind pushes on the spinnaker and mainsails, but there is a wave in front of you and the boat wants to turn away, either upwind, thereby “broaching”, or downwind, thereby performing a “death roll”, an unintentional jibe that wreaks havoc on crew and rig, sometimes dismasting the boat.

Both roundups are dire. Willie was fully focused on avoiding that.

My crew-mate and I were scheduled to relieve Howard and Willie at midnight. I was psyching myself up. In the darkness I looked across at my watch-mate and breathed a little micro-gasp to see that he was snorting a line of cocaine. He was a really good sailor; I just figured this was what he did, and that was his business. We came up on deck and he was the first one to steer. When it is so very dark as that, you cannot see the horizon, and it is very difficult to feel the boat. All you have are the crazy gyrations of the compass, and that isn’t much. Willie handed him the tiller and went straight below to bed. My crew-mate strained to see and comprehend what was happening. About 1 min later, Presto broached, turning 90 degrees from our course, its flogging spinnaker pulling the little fiberglass hull 90 degrees from upright, the deck very close to perpendicular to the water, nasty white-caps of unknown size crashing into the upturned bottom, pushing us down the wave sideways. It was enough to make you puke with fear. But no time for that. Let out the afterguy to give the wind less spinnaker to manhandle. Zero steerage way now, the useless tiller pushed all the way to windward to make the boat turn downwind. Presto won’t go there till you let out the spinnaker. Because Presto is tipped all the way sideways, the mainsail floats on the water, still converting the wind into the 90 degree tip. As I let out a little more spinnaker after-guy, almost like the flip of a coin, Presto is up, with steerage way, heading down wind with the spinnaker still flogging. Now I pull in the sheet and after-guy till the flogging spinnaker fills with a big “pop”, and we accelerate up to 15-30 knots of speed, racing down the next wave. My crew mate still can’t see, or more properly, is seeing things that aren’t there, and we round up again a scant minute later. Howard shouts out from down below, “What the fuck are you guys doing up there?” “You want me to spell you?” I ask my crew-mate. “Yes”. I get on the helm, adrenaline fully pumping, concentrate as hard as I can on the light illuminated wind-gauge on the top of the mast, and the gyrating compass in the front of the cockpit. The boat is bouncing down every swell like a surfboard. The speedo only rarely drops below 10 knots, making the boat wallow, I struggle to counter her every move and keep her headed downwind. I sail for 15 minutes without a broach. Then it hits, I don’t even know why, and we are into the 3rd broach in 30 min. Howard and Willie come up, we take the big ole bucking ballooning spinnaker down, put up a much smaller triangular jib and use the pole to keep it “wing-and-wing” opposite the mainsail, and off we go. A tad bit slower, but with no more broaches through the night. We sail till 3AM, and then Howard and Willie take over the dawn watch.

But my purpose in this narrative is to reveal what happens when the dawn finally comes. The last time I had seen the ocean, it was a freshening 15-20 knots. It looked like the Catalina channel, friendly and fun. Now, at dawn after a night of 30-40 knots, I emerge on deck, and really understand what people mean by “lump in the throat.” It is a very dark, very ominous feeling. The waves are just huge. You stand up straight on deck just to see, perhaps 10 feet above the water, but the waves, every one of them, still obliterate the horizon, filling your eyes with 3 feet of foam on top of 15-20 feet of wave. These kinds of statistics are misleadingly analytical. When you are actually in these conditions, you just feel dread. It feels like, “Oh my, this is a giant mistake. We aren’t supposed to be here. This is just not right.” The wind had actually dropped to the 20-25 knot range, but the waves. They just fill you with dread. But we change to the spinnaker again, and have an amazing sail the rest of the day, probably the best I’ve ever had. Now you can see the water, and maneuver Presto into surfing grooves that just go on for days. We broached maybe 2 times all day. By night-fall the wind had dropped to 15-20 knots and we had an event-free day approaching Point Conception and the lighter winds of the Southern California bight.

This was a really scary night of handling a little boat in 30+ knots of sea out in the ocean off of San Francisco. In July. This is exactly where Psyche is heading in a few days. I looked at my mystical wind-prediction program called “Windyty” last night, and it predicts the same.  (Place the little hand on the red spot outside San Francisco Bay to see the predicted wind.)

Only this time we don’t get to turn downwind and get a ride. Instead we keep Psyche headed  right into it and get breaking waves, each one bringing many gallons of water into the cockpit. The water is 57 degrees. Gosh. It is sounding pretty grim.

But, this is Cal-40 weather. We have a fantastic bullet-proof # 3 jib. Just a knife blade in that blasting wind. We double reef the mainsail. Steve Calhoun, the loving owner has checked and rechecked every fitting every shroud.  Not tested, mind you, but checked.  Then it is just how well do we, the crew, maintain our stomach for the race. Don’t get me started on the stomach thing.

More on waves, next blog!

This site uses Akismet to reduce spam. Learn how your comment data is processed.